Who has the focus in this scene?  What is giving him focus?

“Stage picture” is what the audience sees at any given moment during the performance.

Theater artists are subject to the same esthetic laws as any other graphic artist.  The stage picture must have one or more points of emphasis to give it form and order.  It must have stability to hold it in place.  It must have balance to satisfy the unconscious esthetic demands of the audience.

Unless the characters who do most of the speaking are made visually emphatic, the audience may spend have of its time trying to locate the speaker and during the process it will lose much of what is being said.  The result can only be a confusing performance and a confused audience. A composition in which every part is just as emphatic as every other part would end up being about as interesting as wallpaper.

To achieve emphasis, we use:

There are five standard body positions:

These are listed in order left to right of strength of emphasis.  Full front is usually the strongest body position.  Full back is usually the weakest.  (“Usually” because there are other choices you can make in terms of levels and area that change the emphasis.)

It might seem the most realistic to always stand in profile when you speak to your scene partner, but in actuality, it is a relatively weak move that lacks emphasis or variety.

The stage is divided into areas.  Downstage is usually a stronger choice than upstage, but variety is essential.  Use all of the stage.

Contrast can modify or reverse what position is most powerful.  For example, if all of the actors are lined up standing full front to the audience except one, who is standing with her back to the audience, she is the one who will be the emphatic figure.

The amount of space between the actors tells a story, and should be played with.

Triangles are one simple and visually pleasing way to give focus.  Whoever is at the point of a triangle or an inverted triangle, usually has focus. The shaded dot in the following two figures is the person with focus.

Being lit can give emphasis.  Learn to feel when the light is on your face.

It’s easy to emphasize one one actor, it’s harder to emphasize more than one – it employs the same principles described above, but requires greater awareness.

It does not need to be pound-for-pound physical balance.  A single figure on one side of the stage can balance an entire crowd if the single figure is far enough away from the fulcrum. 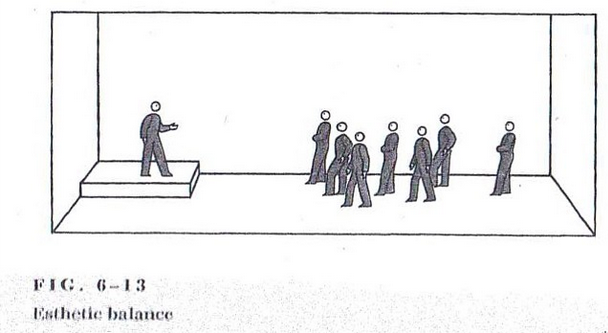 If everything is happening upstage, the audience loses involvement.  Keep some action in the downstage corners to pin down the stage picture.

A cross is the movement of a character from one place to another onstage.  A direct cross is straight across the stage to the person or target.  A curved cross makes an arc and has a different emotional impact and style.

Once someone has crossed, the balance of the stage picture will have changed and you’re now telling a different visual story.  How will you rebalance the stage?

There is a lot more to say about movement, please notice it and play with it in rehearsal.  Whether you stay still or move during, before or after speaking makes a large impact, and should be considered.